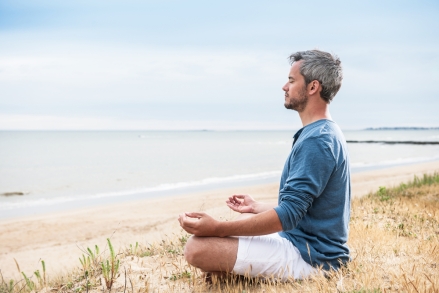 An article from our friends at A Plus:

A true example of mind over matter.

Meditation has shown that the human mind is a powerful thing. Through focused thought, humans have been able to improve their concentration, promote mental well-being, and encourage various aspects of physical health as well.

Some of these assertions, however, have been dismissed as a placebo effect rather than actually being effective. A new study by researchers at Wake Forest Baptist Medical Center in Winston-Salem, N.C., has put this to the test by pitting mindfulness meditation against a placebo. The results unequivocally showed that meditation came out on top for pain management. The results were published in The Journal of Neuroscience.

The placebo effect is a fascinating — though little-understood — phenomenon in which a person can actually improve their condition as long as they think they’re getting treatment. Pseudomedications that have no active ingredients are given to subjects who believe they’re taking an actual drug. Once they believe that they are supposed to feel better, some actually see an improvement in their symptoms.

“We were completely surprised by the findings,” lead researcher Fadel Zeidan explained in a statement. “While we thought that there would be some overlap in brain regions between meditation and placebo, the findings from this study provide novel and objective evidence that mindfulness meditation reduces pain in a unique fashion.”

Participants in the study were separated into four groups: mindfulness meditation, placebo meditation, placebo topical cream, and the control, which did not receive treatment. Mindfulness meditation is characterized by sitting still and focusing exclusively on one’s breathing. Though it is difficult to only think about breathing at first, it becomes easier with practice. In this study, this meditation was performed four times a day for 20 minutes per session.

Next, each of the participants was subjected to a painful stimulus (in this case, a probe heated to 120 degrees Fahrenheit) and asked to rate their pain. In order to keep the results from being completely subjective, brain scans were done using an MRI.

Interestingly, those who practiced mindfulness meditation experienced more than double the pain relief compared to those who used the placebo ointment, and the decrease of emotional response to the pain was nearly tripled as well.

“This study is the first to show that mindfulness meditation is mechanistically distinct and produces pain relief above and beyond the analgesic effects seen with either placebo cream or sham meditation,” Zeidan continued.

The results of this study are very interesting and a testament to not only the prowess of the human brain, but also how much we have left to learn about how these processes work.

The researchers acknowledge that one of the limitations on the study is that all of the participants are ordinarily pain-free. Hopefully future studies will explore how meditation compares to placebo for those who suffer from chronic pain.